In 2003, I was diagnosed with schizoaffective disorder. Over ten years later I published a book called Schizophrenics Can Be Good Mothers Too, written under the pseudonym Q.S.Lam, which deals specifically with postpartum psychosis.

I find the term mental illness very stigmatising. What does it actually mean? I see myself as high functioning, creative and productive, even though I am often battling with complex symptoms. Faking being normal is very exhausting for my brain. It would be much easier if I could simply tell people openly about my condition.

If I label myself mentally ill, it would render me more disabled and isolated. However, by accepting my condition, and understanding the symptoms and triggers, I take control and manage it – this is what I’ve learnt to do without the aid of medication. The biggest problem I face is educating those around me. And this is the task I’m undertaking through my mental health campaigning.

I have been diagnosed with schizo-affective disorder. I assume that counts as a serious mental illness, but the way I manage my condition is not the norm. I have never argued that people should emulate my approach, but I do believe that creativity has a palliative impact on the brain. I’m not defined by my diagnosis. I’m also a mother to two children, a published writer, commissioned filmmaker, and Director of Pigment Explosion – an international arts organisation.

Non medical ways to be well

For me, there is no catharsis with art or writing. Far from it. Creativity is a compulsion. If I don’t make art, then my mind becomes uneasy. Similarly, I am compelled to move my body to release endorphins – just a quick bike ride to the shops will do. And for those few moments, my mind is empty and light. Breathing and meditation also helps me calm and empty my mind.

Diet, too, is key. Foods rich in Omega 3 (salmon) or serotonin (e.g. pumpkin seeds) and dopamine inducing-foods (dark chocolate) really help. Sleep and hydration are also fundamental. If I don’t sleep or drink enough water, my brain quickly breaks down. But sleeping can be elusive if I am feeling stressed or mentally agitated.

It’s not just making art and being creative that keeps me balanced. I harness all these strategies to stay well. Implementing these tools is time consuming and requires discipline. Having small children certainly tests my patience and resolve, and there are moments when I lapse. Yet having children has been an anchor to the real world, stopping my drift into a parallel psychotic one.

Schizoaffective disorder involves having manic delirious highs and devastating suicidal lows. You can also be susceptible to auditory and visual hallucinations and be predisposed to psychosis if sufficiently sleep deprived. Psychosis struck in 2009 and 2010. I also experienced postpartum psychosis in 2010 and in 2013.

Postpartum psychosis is a terrifying condition and entails, in my case, up to 30 visions a day and an incessant voice in my head telling me to harm myself and my baby. And yet, I managed somehow to deal with the visions, dismiss them as mental aberrations and soldier on.

My mind was reduced to rubble. Each day when I wake up, I try to reconstruct it from the shards with tape and string. Each evening it is back to rubble again. It is a constant process of reconstruction. But there is no point blaming myself for this affliction. It is what I do with my dented mind that counts.

I also had D-mer (Dysphomic Milk Ejection Syndrom  – abrupt negative and uncomfortable emotion that occurs just before milk release) when I breastfed which led to dysphoria each time my baby latched on and gruesome visions that only abated when the feeding was over. Statistically, such cases are very rare.

During the traumatic periods of my postpartum psychosis, I assiduously drew both my children when they were breastfeeding or sleeping. I kept on drawing them even when I was at my lowest ebb. As they were growing up, I have got them involved in my practise. Each year, I make an oil painting of both my children and will do so until they are 18 – producing scrolls with their random marks and embarked on a 1000 postcard project with them. They drew squiggles on the postcards and I transform them into ethereal magical landscapes. I’m also creating the 30-foot scrolls depicting issues relating to war and conflict  – issues I’m also passionate about. 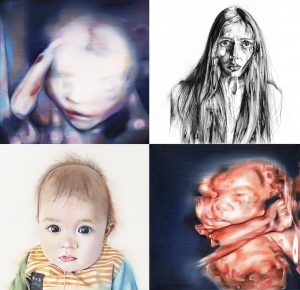 Art has helped to occupy and divert my mind. It also helps to cement a bond with my children that is unbreakable. I explained my mental health condition to my children and I think my eldest boy understands when ‘Mummy’s brain is hot’. These are complex ideas but I believe if we teach our children about mental health from young, we will be helping the next generation.

I wrote my book for my children – to give them the tools to navigate the maze that is in the mind, and to illustrate how I use art everyday to keep myself motivated, my brain activated and in the process, make a contribution to society.

Since experiencing psychosis and postpartum psychosis, I’m passionate about spreading global mental health awareness and contributing to destigmatising mental illness, in the UK and beyond.

I have dealt with suicidal ideation for decades and I managed the postpartum psychosis without much medical support. The support I would like is simply not available. But sometimes I need to talk. There is no shame in reaching out for help when you’re feeling suicidal. It could save your life.

You might not have an empathetic friend, family or therapist to confide in, but there is always the help line, it’s anonymous and 24/7 manned by volunteers who give up their time and want to listen. You can always hang up and keep on trying until you hear that kind soothing voice you crave inside; and now the Samaritans is free, which makes it accessible to everyone in the UK.

It doesn’t matter where you are in the world either. If you have access to the internet calling the landline help line number costs a few pence. No one has to go through such crippling and disturbing mental torment alone.

The day after last Christmas, in the early hours, I called the Samaritans. I wasn’t sure why I called at that precise moment, my voice was strained because I had been bottling things up for weeks thinking it was better to be stoic and struggle on like everyone else does.

The longer I spoke the more emotional I became and very soon I was sobbing and the snot was dripping from my nose. I kept on apologising but the man, who was called David, was kind and patient. And that’s all I needed to know that someone in the universe, albeit a stranger, cared. Talking helped to flush out the mental debris that was clogging up my mind and skewing my perspective. The memories that haunted and loomed, but served no purpose, and all the other stuff that stalks you, I wanted to be rid of it all.

The following day, I felt better, less encumbered, I took the children out to a butterfly park and was able to face the world and complete small tasks because at the moment that’s all I can manage; and that’s ok – it won’t always be like this.

The Samaritans always ask me at some point during the call: ‘Do you feel suicidal?’ And I usually reply, ‘Yes’, because often I feel I cannot go on; want to run away; believe that none of the work I do makes a difference and that the children are better off without me. The asking of this question is so important, delivered in a non-judgmental tone. As you try to answer by the end of the conversation you realise that you actually want to live and face tomorrow.

This is why there is no shame in feeling suicidal or talking about it either, for people like me it’s habitual, but society makes us feel ashamed by an urge that has become the norm.

I believe suicidal ideation is our brain’s way of saying: ‘I’m not coping, I can’t see a way out.’ Suppressing such thoughts makes them more horrifyingly real. The urge will pass if you allow it too, like an angry storm it does not last forever – the sun eventually does come out.

As I write this, I’ve just completed a 30-foot scroll with patients at the Malaysian Mental Health Association. Dr Ang – from MMHA – has been a real ally, and is supporting my campaign. Dr Ang told me candidly that very few people feel able to talk openly about mental health in Malaysia. It took me years to come out about my own issues, now I have no choice but to be honest. 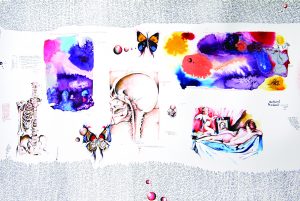 Many of the patients I work with are on medication and diagnosed with conditions like schizophrenia. When we made the scroll I felt connected with them, and I believe the act of making marks does soothe the brain. It is the 12th scroll that I’ve completed to date. My vision is to create more scrolls with people who have experienced mental health issues all over the world; these scrolls not only help patients but form an important documentation of the internal landscape of those with complex minds.

I plan scrolls in Singapore, Burma and Bangladesh. It’s an ambitious project but in order to tackle this global mental health problem we need to think outside the box. In my own case I’m not on medication. I’m not advocating that people adopt my approach. It’s what has been right for me. However the reality of the situation is that many people do not have access to doctors or medication. So what do these patients do? Surely we have a duty of care to give everyone suffering – wherever they are – basic information, tools and strategies to help them stay well.

For me, that’s through art, writing, ideas, publications and exhibitions. It’s the best way I know of taking control of my mind, and contributing meaningfully to society.

Join us on November 18th in Cardiff at Compassionate Approaches to Mental Heath – a one day experiential event designed to inform, inspire and empower people living and working with mental health issues.

Please book now to join us in Cardiff. Limited £35 tickets – sponsored by Welsh mental health and wellbeing charity Gofal – are available for people with lived experience and their supporters.

Want to join the discussion?
Feel free to contribute!

Why meaningful conversations matter by Jo Watson
Scroll to top